Abstract:
There is a move in the industry to more and more alternative liquids because they have virtually no impact on the environment. But what happens in the transformer? We will focus on the different impacts each of these types of oil has on the pressboard in the transformer. To give the end-user a better practical guideline when they need to choose an insulating liquid.

Please note that this is experimental data and not industry-based data. The experiment was conducted on 9 different oils, a 3mm thick pressboard was aged in each of these liquids for a 12 month period at temperatures 120, 135, and 150⁰ Celsius in a vessel with an open as well as a closed expansion system. The load cycle has been simulated by decreasing the temperature to approximately 80⁰C for two hours per day.

Mineral oil is made from crude oil and it consists of a variety of hydrocarbon compounds. The hydrocarbon groups are mainly paraffinic, naphthenic, or aromatic. When an oil contains less than 50% carbons in its paraffinic structure it is defined as naphthenic oil, for paraffinic oils, this value is 56% or more. Iso-paraffinic contains branched molecules which makes them suitable for colder climates as the pourpoint is lower than normal paraffinic oils.

Natural esters contain the polyol group glycerol, in synthetic esters, the polyol group is typically pentaerythritol.
The fatty acid composition, which is part of the ester molecules, depends on the nature of the oilseed. the fatty acid composition can be changed by hydrogenation, this yields a more thermally stable product, less susceptible to oxidation.
The possible catalytic influence of metals on the aging of the oil/solid insulation was taken into account in the following ways, the sandblasted steel walls of the one test chamber were left bare intentionally, copper plates with a 3dm³ and core steel with a 6dm³ surface were placed in each test chamber in addition to the samples.
The operating temperatures were recorded and continuously monitored by sensors that were mounted in the center of the chamber.

In the four chambers with mineral oil more water from the deteriorating pressboard was formed than the oils could dissolve. In the case of oils 6,7 and 8, the water condensed in the cooler expansion system. In the case of 9, the water formed an emulsion with the oil.
The water content of the mineral oils increased steadily throughout the experiment. The water content of the ester also increased in the beginning, after four months we saw a decrease.

The tensile strength and degree of polymerization (DP) are used to assess the aging of the solid insulating materials. When the tensile strength deteriorates too much due to thermal stresses, the insulating material cannot withstand mechanical stresses that would occur in the case of short circuit events. Using the DP value is more accurate, this is a measure of the average length of the cellulose macromolecule.
For the shorter experiments, the tensile strength and DP decrease values were about the same for mineral and ester oils, the longer experiments show clearly the larger tensile strength and DP value decrease for mineral oils, in ester oils, the decrease of these two factors were much smaller. This is due to the better absorption of the excess moisture by the ester molecules, thus ensuring a lower moisture content for the system and not such a large acid formation for ester oils.
Water and organic acids are byproducts of the thermal degradation of solid as well as liquid insulation. Due to their polar nature, both products are present in the liquid insulation and the solid insulation. The dielectric properties are indicative of the change of the insulating system due to the formation of conductive ionic compounds.
Liquid insulation
The water content of liquids exhibited the expected increase for mineral oils. The water for the ester also increased in the experiment with the open expansion system at 120⁰C. The experiment with the closed expansion system and aging temperature 135 and 150⁰ C showed a decrease in water content after some time. The water has obviously been consumed by the chemical reaction, most by the hydrolysis of esters. It is often claimed that esters are capable to dissolve much higher amounts of water than mineral oils. However, it is the relative humidity and not the absolute water content that is relevant for the electrical properties of the oil. The relative humidity is calculated by dividing the water content by the saturation water content.  The amount of water that can be dissolved in a liquid is temperature dependent, this also changes quite significantly with aging status.
The electrical strength, one of the most important requirements, is strongly influenced by the amount of free water. It should be noted that the breakdown voltage of mineral oils aged for two or four months at 150⁰C was only approximately 25% of the initial value.
The acidity has no direct influence on the electric strength. The vegetable ester has a much higher acid number than mineral oils, yielded the same electrical strength as mineral oils.
Conclusion
Vegetable esters are much more susceptible to oxidation.
* The initial aging rate of pressboard in ester and mineral oils were the same.
* The ester liquids had a reaction with the water after a certain aging time, this is dependent on the aging condition. From that point forward the aging rate for ester liquids slowed down remarkably.
* At high temperatures and high water concentrations, the ester liquids did consume some of the water by means of hydrolysis, thus preventing the increase of water content in the pressboard and thereby slowing down the deterioration of the cellulose.
* At the point where a reduction in water content took place, was the same point where a decrease in the rate of cellulose degradation was noted.
*Hydrolysis reaction of esters will lead to the formation of longer chain fatty acids, further investigation is needed to see if these molecules will have a detrimental effect on other transformer materials at higher concentrations.
* High acidity did not have a negative effect on the aging rate of the pressboard. This confirms the results of investigations that found a high molecular acid does not accelerate the aging of cellulose.
* The quality of the mineral oil, standard grade, high grade, non-inhibited, inhibited, did not reveal any substantial differences in the aging rate of the pressboard.
REFERENCES: 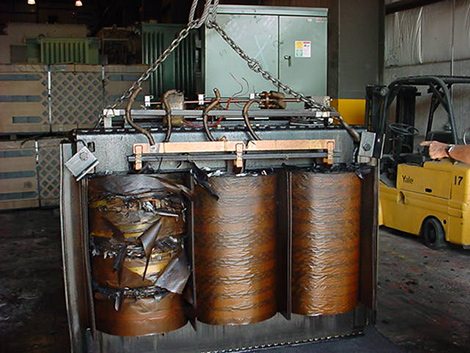 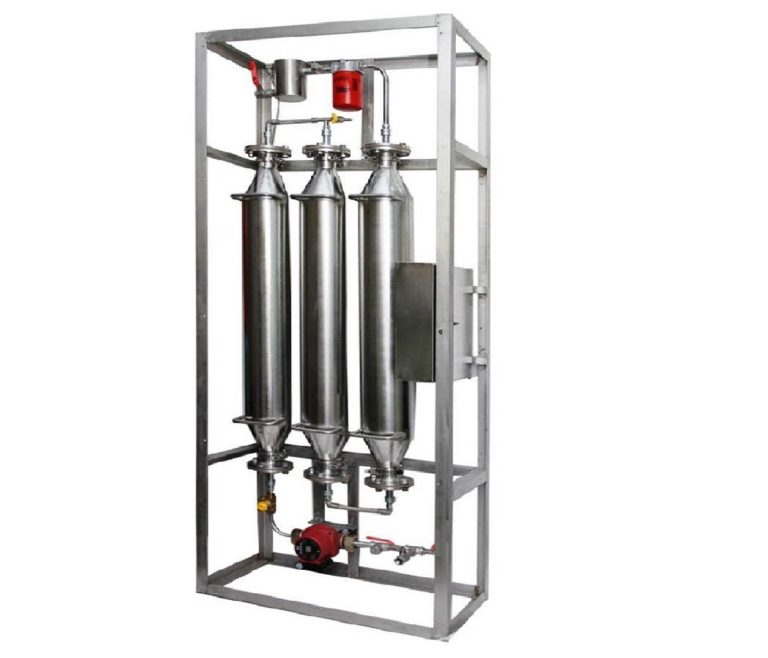 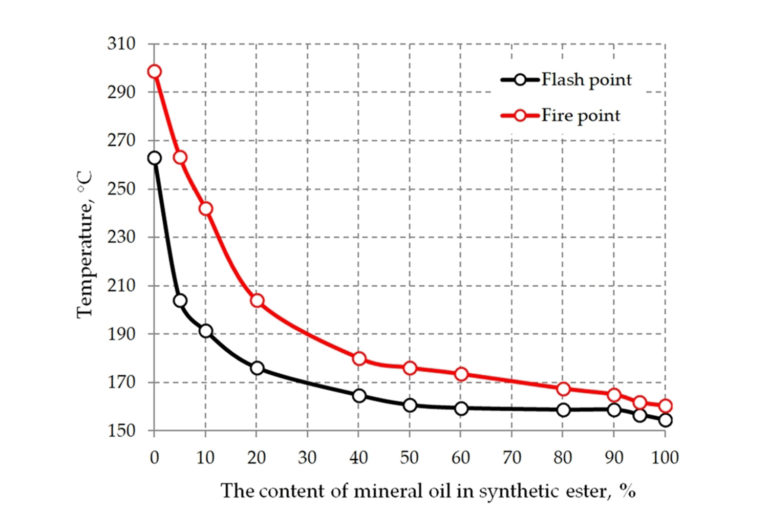 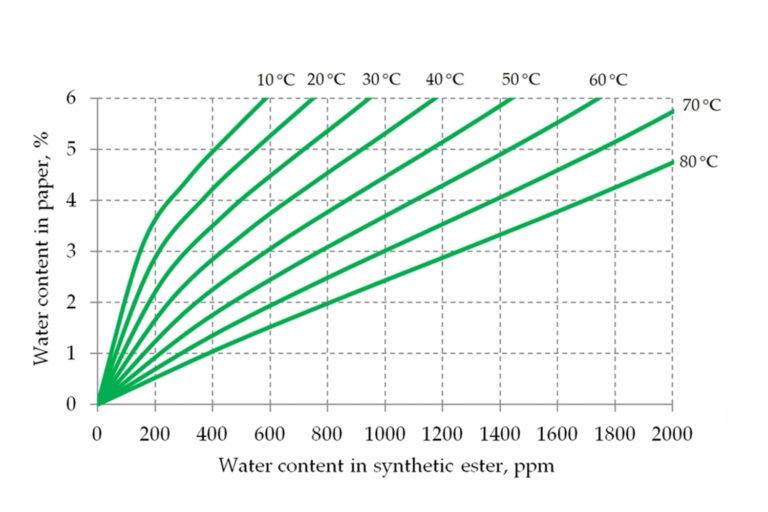 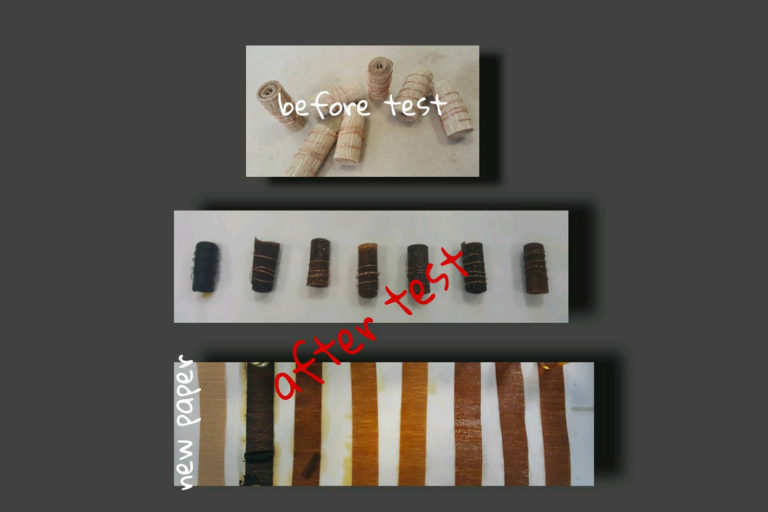 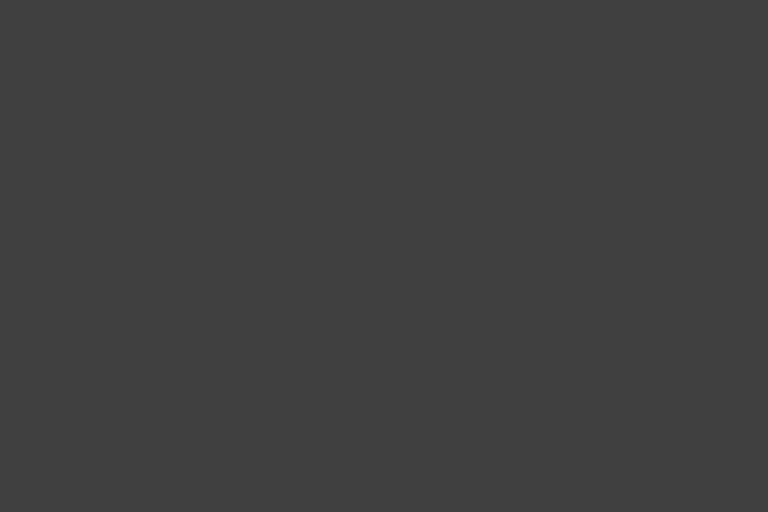 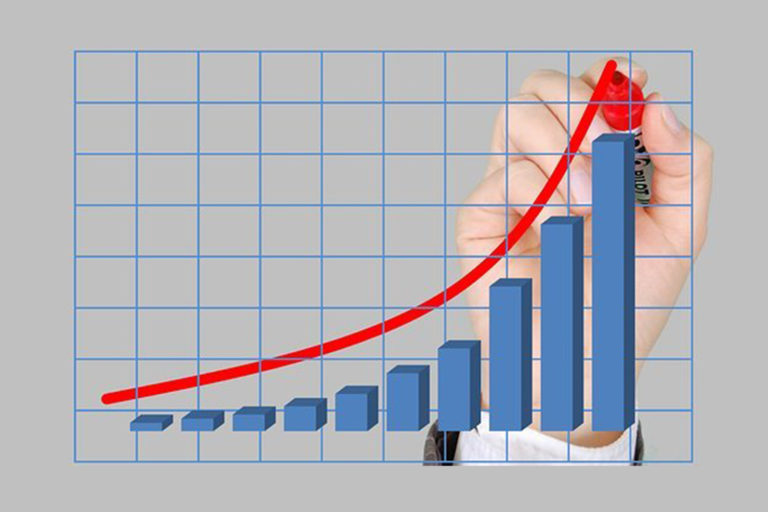 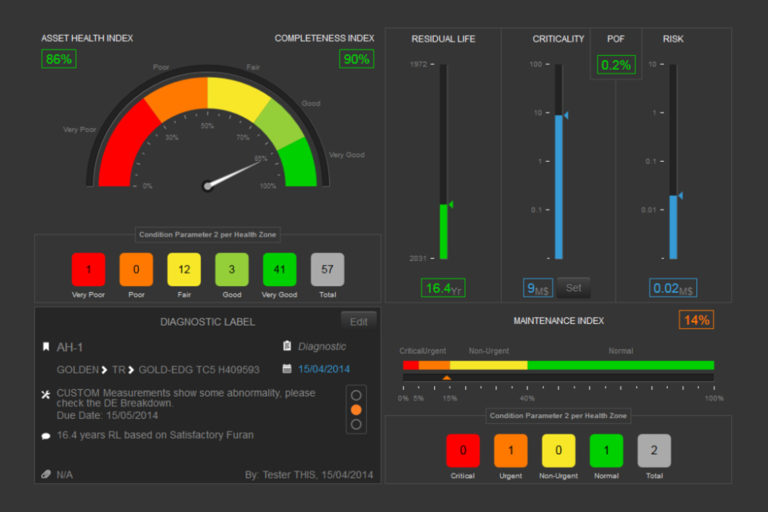 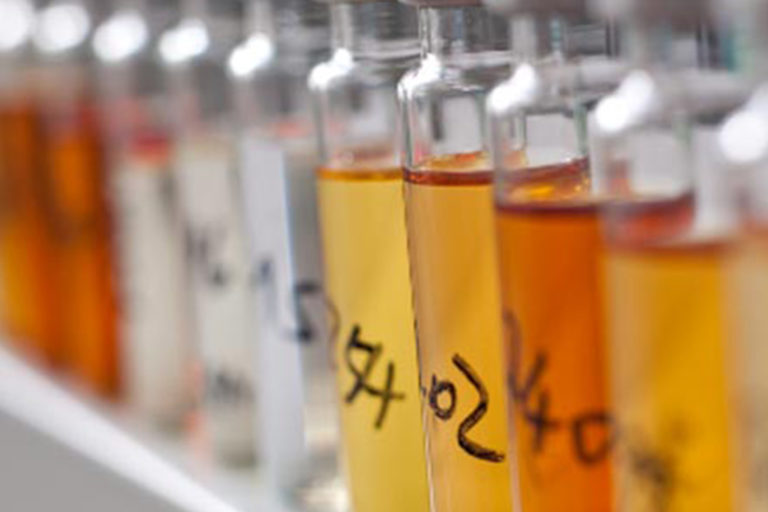